The Hack that got me into Y Combinator

On the Y Combinator application, they ask you (well they used to ask you) what ways you have hacked a system unrelated to your startup. I want to tell you about that hack. I used the same hack to get Y Combinator’s investment. Actually, I got a little help both times I was funded by Y Combinator. Well, a little help besides making a great company of course.

The hack was dead simple. I wanted something, so I asked for it.

I was broke and poor and just out of college, I had some crappy credit cards, but I wanted a good one with good rewards. So I googled all the top credit cards and looked for a free one with the highest cash back reward. At 1.5%, Capital One QuickSilver was the card of choice.

I had to have it.

I applied online and got rejected immediately. I didn’t have a real income. I made MAYBE $12,000 that year from my startup Shotput. So I gave them a call. They said this card is for people with good credit and a good income. None of this made sense to me. Who cares how much my income is. I have a perfect record of paying back card statements on-time throughout college. Capital One should be happy to have me as a customer.

So I did what anyone should do when a company is acting against its own interests, I made my case to CEO.

Unfortunately, for me I didn’t know the CEO and the CEO didn’t know me. Fortunately, Google always has a lead. I found out his name was Richard Fairbank (heh BANK!) and several different answers on the internet claiming it was his real email. One of these might work, I figured. I sent off my plea to all of them. 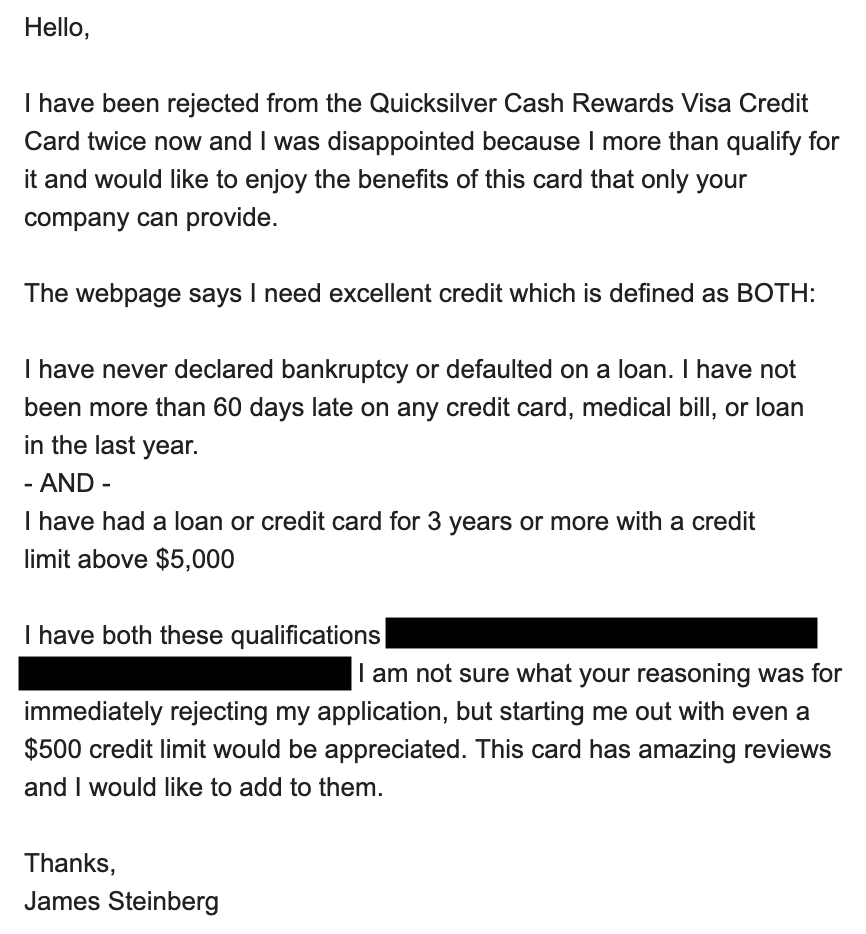 I figured they could throw me the lowest possible card to avoid risk on their part.

Within a few days, I got another call from Capital One. This time, they said they were a special case team regarding my card. Richard, you are amazing!

They started to ask me the exact same questions they did last time. Can you confirm this info and that? Uh oh I thought, they are going to ask my income and just reject me all over again! But after confirming everything, they said thanks. No waiting to confirm my application or anything.

Within a month, I had my card :D. It has been my favorite card and bank since. Anytime I have had a problem with Capital One since, I use the same email address and it always gets fixed.

Everything is a negotiation, everything has a backdoor.

Later that year I wanted something else. I wanted to get into Y Combinator.

I was crashing on Stanford’s campus when Startup School was going on. Y Combinator had just named Sam Altman their new president. I simply went to one of the classes up to Sam and said:

“My company Shotput has been handling the logistics for other startups for about a year now and I think the current and previous YC companies would find this useful.”

He proceeded to email the entire alumni with our service which led to our first 10 customers. I then followed up with how useful YC companies were finding us. It was only a week before the new batch was starting, but he told us to apply. Turns out he gave us a sweet recommendation. We got the interview and were flown out within a few days.

Not bad for just asking.

Be direct. Just ask for what you want.

While doing B2B sales for Shotput, I did the exact same thing. Look up the CEO or contact of anyone powerful at a company and simply ask them to try our service.

It doesn’t always work, but when it does it’s worth all the tries. I have been ghosted and ignored by just about mentor I have ever attempted to have. But I’ve also had several intense conversations with rich and famous people just by asking them to meet up. Duke Chung, Founder of TravelBank who sold Parature for over 100 million to Microsoft was one. Gary Bradski, co-founder of OpenCV who sold Industrial Perception to Amazon also comes to mind.

If you don’t know what you want, you will definitely not get it. This is all probably obvious advice, but sometimes it isn’t clear. When you get blocked by a gate, you can just hop over by going to its CEO.

Comments suck for discussion. Email me your criticism or thoughts here. If we discuss something noteworthy, I’ll update this article.
Subscribe to be notified when an article has been updated and a new one comes out.